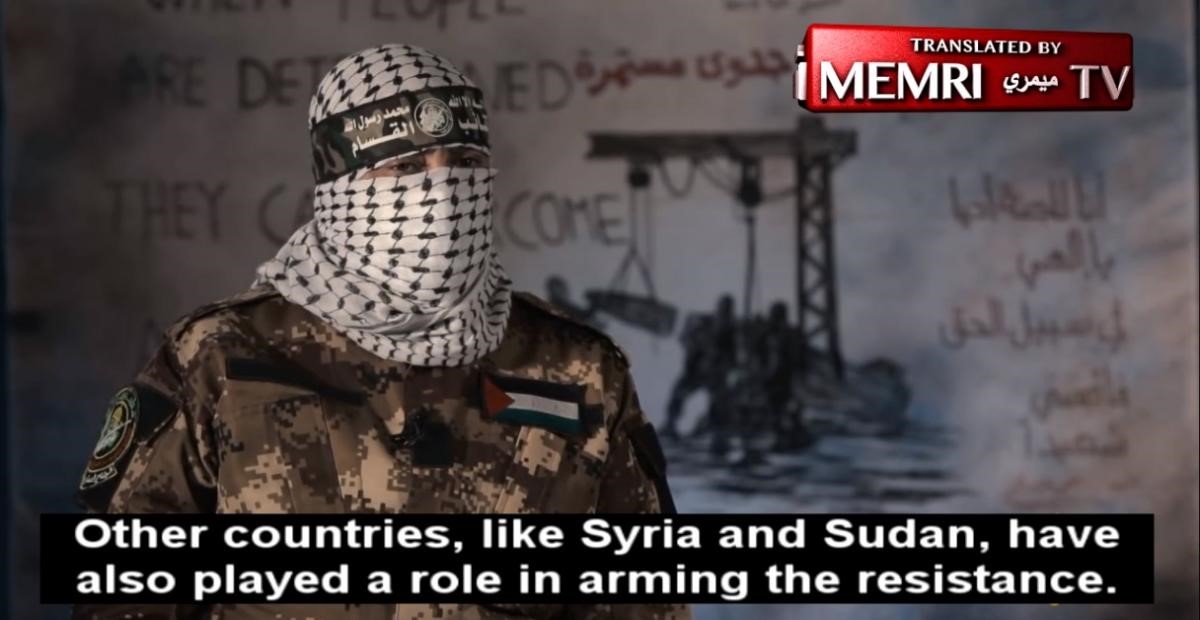 „Various Types Of Weapons Have Arrived To Gaza From Iran… Other Countries, like Syria And Sudan, Have Also Played A Role In Arming The Resistance”

Narrator: „In this footage, which is being shown for the first time, members of the Al-Qassam Brigades can be seen reassembling the parts of a Fajr missile that arrived in a new shipment of long range Iranian missiles. The resistance in Gaza [received] them despite the tightening of the siege. In these exclusive images, Kornet anti-tank missiles can be seen.” 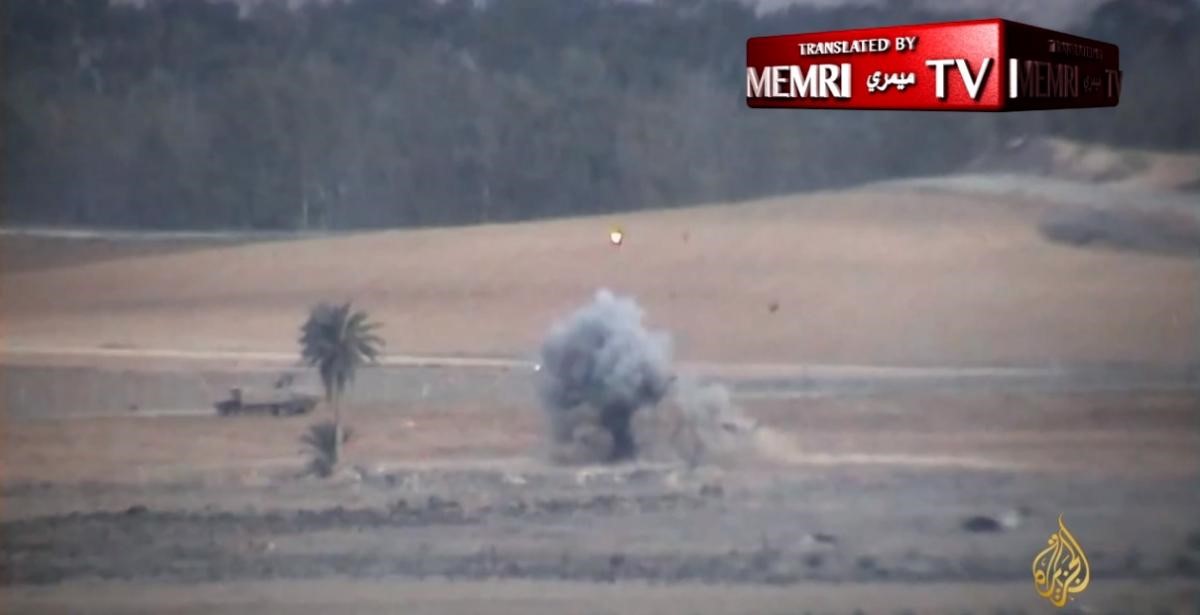 Abu Ibrahim, Commander from the Military Production Unit of the Al-Qassam Brigades: „The weapons came to us, by land and by sea, from hundreds and thousands of kilometers away.

„Various types of weapons have arrived to Gaza from Iran. The resistance fighters in Gaza were in dire need of these weapons, such as the Kornet and Fajr missiles, and many other types of modern weapons, which are still very much in use on the battlefield. 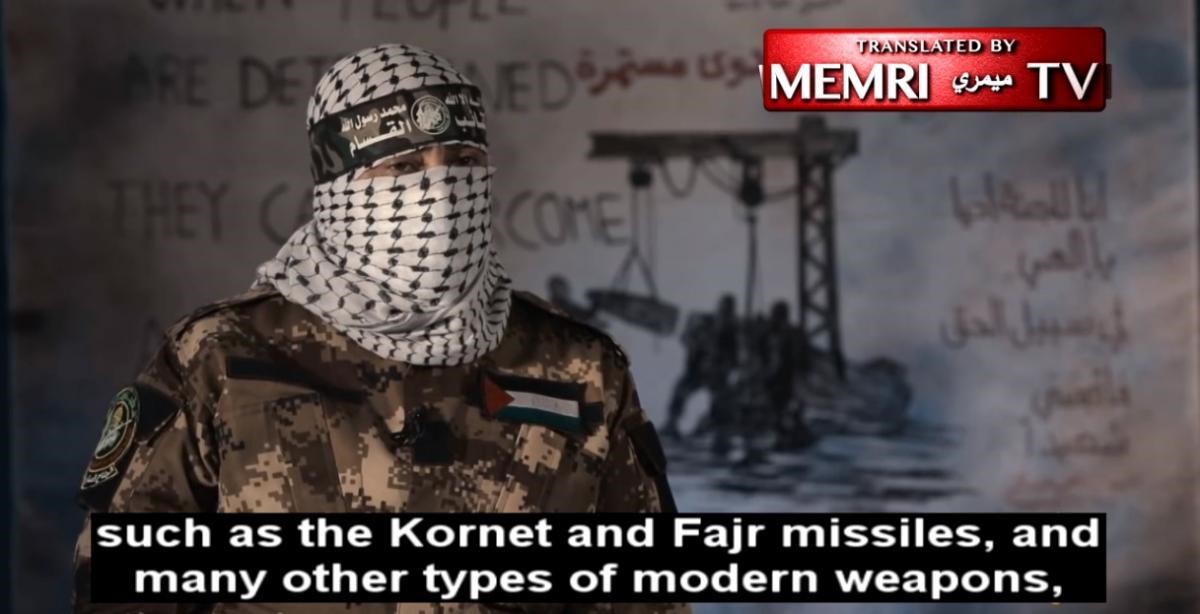 „Other countries, like Syria and Sudan, have also played a role in arming the resistance.”

„Under This Rubble, There Are Unexploded Israeli Missiles And Shells[;] They Have Become A New Source For The Weapons Of The Resistance”

Narrator: „Under this rubble, there are unexploded Israeli missiles and shells. They have become a new source for the weapons of the resistance. The Al-Qassam Brigades are revealing a multi-phase project to transform the remnants of the Israeli war into modern missiles.”

Abu Ibrahim: „At the beginning, we decided to collect those munitions from the ruined houses and fields, because they constituted a direct threat to the lives of the inhabitants and the farmers. During the process of removing [these duds], large and diverse quantities of munitions were accumulated by our brothers in the Engineering Corps.”

Abu Salman, Commander of the Engineering Corps of the Al-Qassam Brigades: „After the 2014 war, the Engineering Corps dealt with many munitions throughout the Gaza Strip: bombs, mines, explosive devices and 155mm Howitzer shells. There were also hundreds of MK 84 bombs, each of which contains 470 kilograms of tritonal, a highly explosive material that is more powerful than TNT.

„We started by surveying all the unexploded munitions. We established a committee of specialized engineers. Our strategy was to recycle these munitions and make optimal use of all their parts. Our idea was to turn this crisis into an opportunity.”

„We Dug Into The Ground And Pulled Out The Pipes, So That They Could Be Used In Our Military Industries” 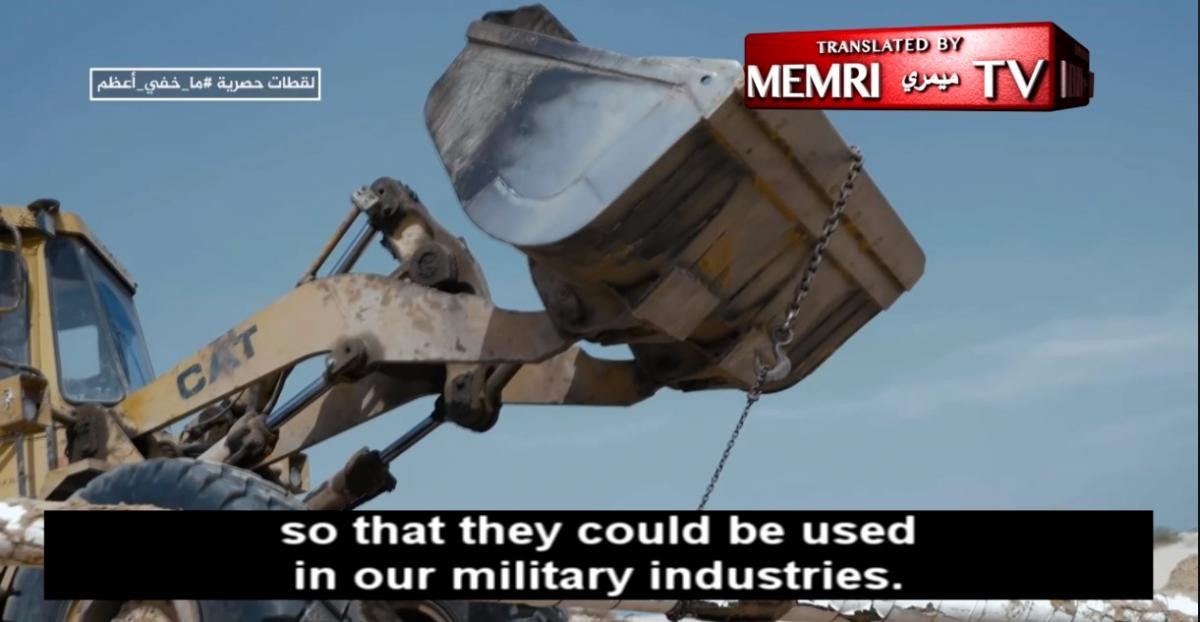 Narrator: „The reclamation of the unexploded Israeli shells was not an easy task. There were several martyrs in this complicated production project. One of the pioneers and supervisors of this project, Ibrahim Abu Al-Naja, was one of the most prominent martyrs. While the plan to reuse the explosives in the Israeli shells was moving ahead, long water pipelines were found buried in the areas of the settlements from which Israel withdrew in 2005.

„This discovery turned out to be a qualitative leap. These pipes, which stretched from the liberated settlements in the west across the Israeli border to the east, had been hidden from the eye. For years, they served Israel in its theft of Palestinian water.”

Abu Ibrahim: „In the belly of the Earth, we found large quantities of thick metal pipes. It was part of a network that had been used to steal Gaza’s groundwater and pump it into the occupied lands. We discovered the plans for that network, and then we dug into the ground and pulled out the pipes, so that they could be used in our military industries.”

Narrator: „In this documentary, we obtained exclusive footage from one of the workshops producing the long range Qassam missiles. These missiles have made distinct developments in their range, precision, and destructive power. These images show modern missiles being produced by recycling the unexploded Israeli shells, as well as the explosives they contained and the water pipes that were found.” 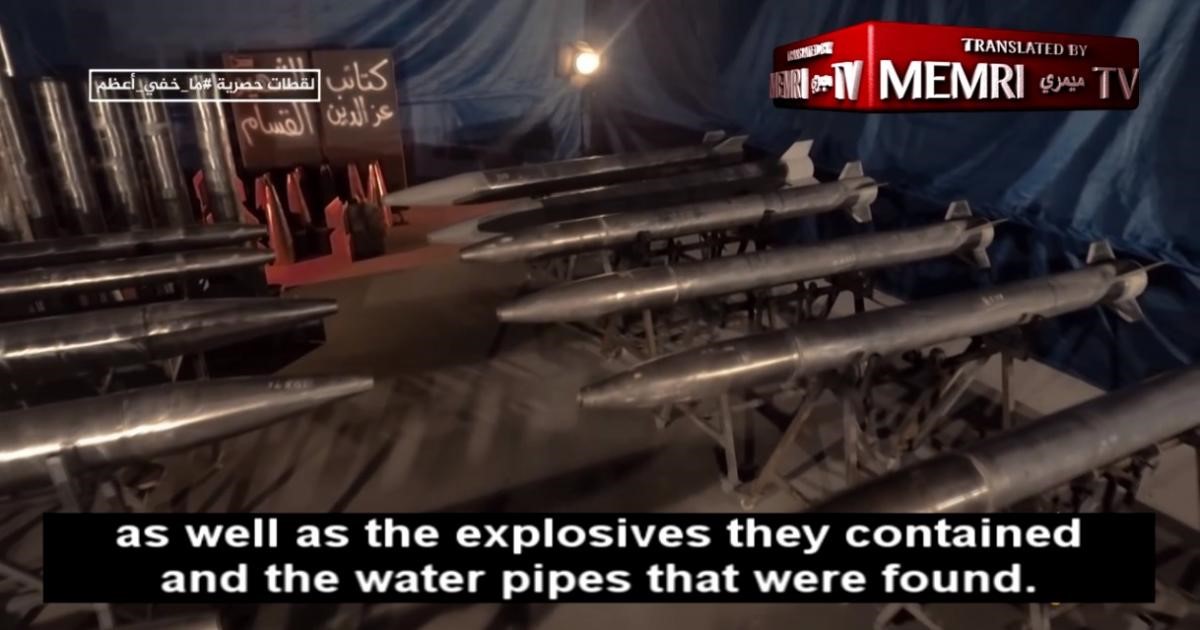 Abu Ibrahim: „We managed to use these caches to double our missile force despite the siege. This enabled us to maintain continuous fire in keeping with the needs of the battle.”

Narrator: „The Al-Qassam Brigades reveal for the first time that this cluster of missiles that were launched toward Israeli targets in the round of escalation witnessed by Gaza in May 2019, had been missiles produced from the remnants of Israeli shells from the 2014 war.

Abu Saad: „The most salient usage of these missiles was in the May 2019 missile strike against the occupation’s security and military posts that were in and around the city of Ashkelon.”

Narrator: „The sea concealed in its depths what the resistance called 'a precious military treasure.’ In an unexpected place, men from the Al-Qassam Brigades’ frogmen unit found the wrecks of two [British] warships that sank in the sea of Gaza [during WWI). It took a lot of effort, but they managed to get inside, where they found large quantities of sunken shells.” 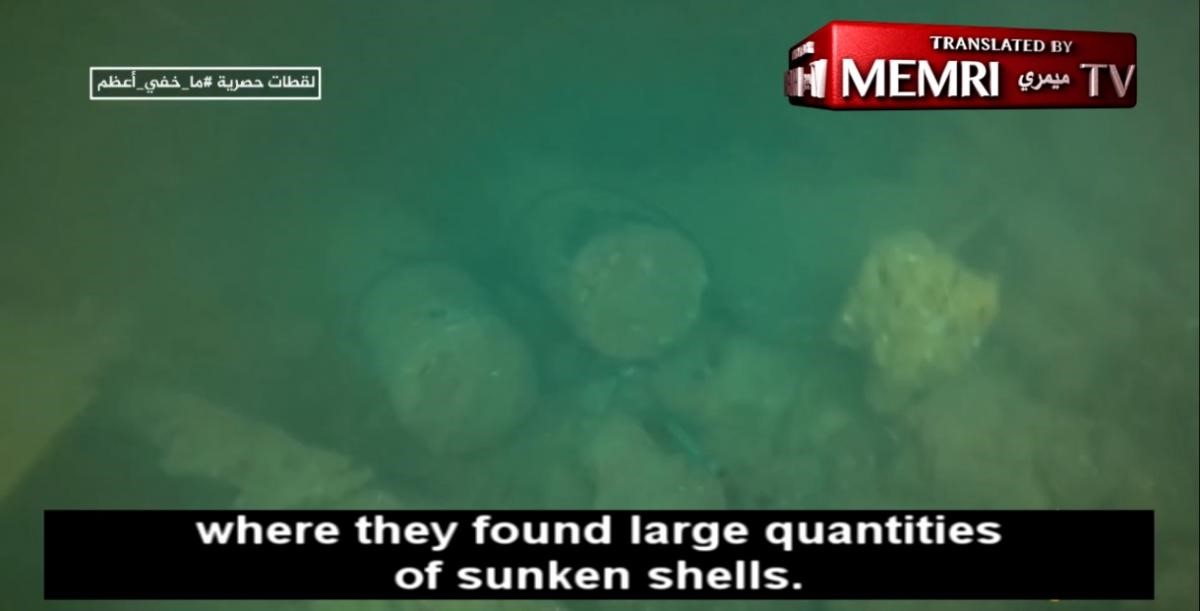 Abu Musa: „We found a large metal structure with several types of cannons attached to it. It turned out these were the wrecks of a military ship. A professional committee was formed to investigate the matter and unearth the secrets around this discovery. We decided to expand the search perimeter around that ship. That is when we found another, smaller, ship approximately 800 meters away. On these two ships, we found rooms filled with cannon shells. In keeping with the instructions of our brothers, we began to extract those shells. The shells were secured and had no detonators. This made it easier for us to extract them from the wrecked ships. But since there were so many shells and they weighed so much, extracting them took us a lot of time and required a lot of effort.”

Narrator: „This footage, which is being revealed for the first time, shows part of the operation to reach the two ships and the efforts to extract the shells safely and bring them to shore. All the steps of this complex security and military operation in the sea of Gaza were completed successfully.” 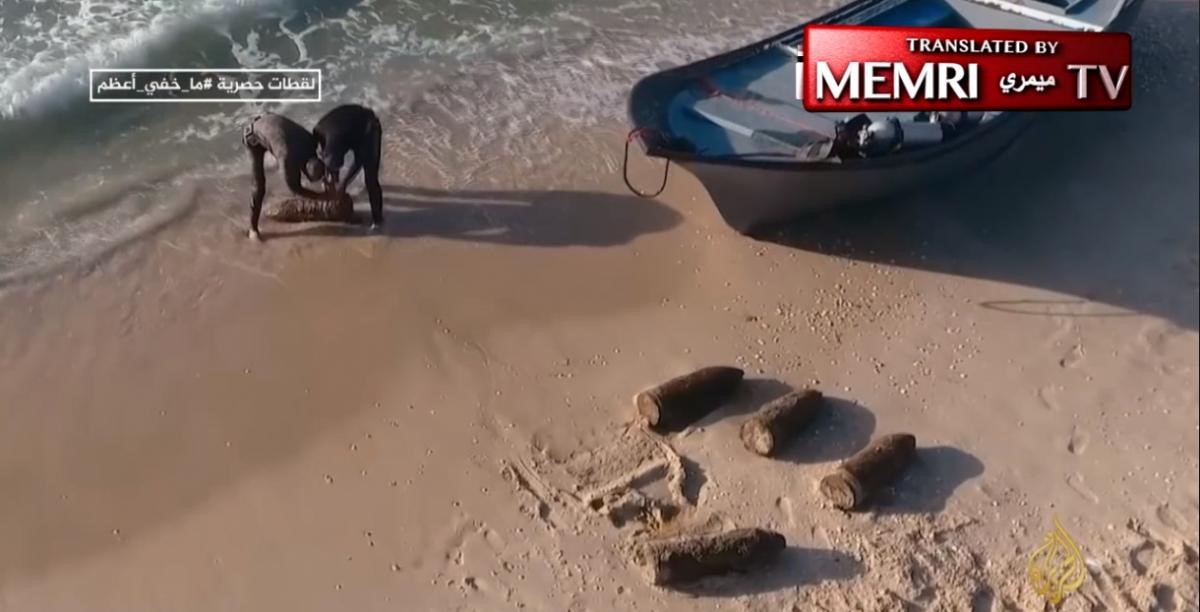 Abu Salman, Commander of the Engineering Corps of the Al-Qassam Brigades: „The British ships were equipped with several types of cannons. The biggest one was a 233 mm cannon. It had steel shells that weighed 138 kilograms. These cannons were used to shell targets on the shore. Each shell was 60 mm thick and made of iron. These shells were made in Britain to be shot from cannons, and they are unique in that they have steel casings. Because of the siege, it is impossible to find steel in Gaza.”

Narrator: „In this workshop, the men of the engineering and production unit of the Al-Qassam Brigades worked to prepare the British shells to be used in new missiles. There were hundreds of such missiles. The discovery of the British shells was a great achievement in light of Israel’s ban that prevents iron and steel from entering Gaza.”

Abu Salman, Commander of the Engineering Corps of the Al-Qassam Brigades: „We tested their ability to penetrate and destroy the enemy’s reinforced concrete fortifications. We made an experiment on a 40-cm-thick concrete roof that had been left behind by the enemy when it withdrew from Gaza in 2005. The target was completely destroyed. The shells from the British destroyed were transformed into warheads for the Sejjil-40 and the Sejjil-50 missiles.” 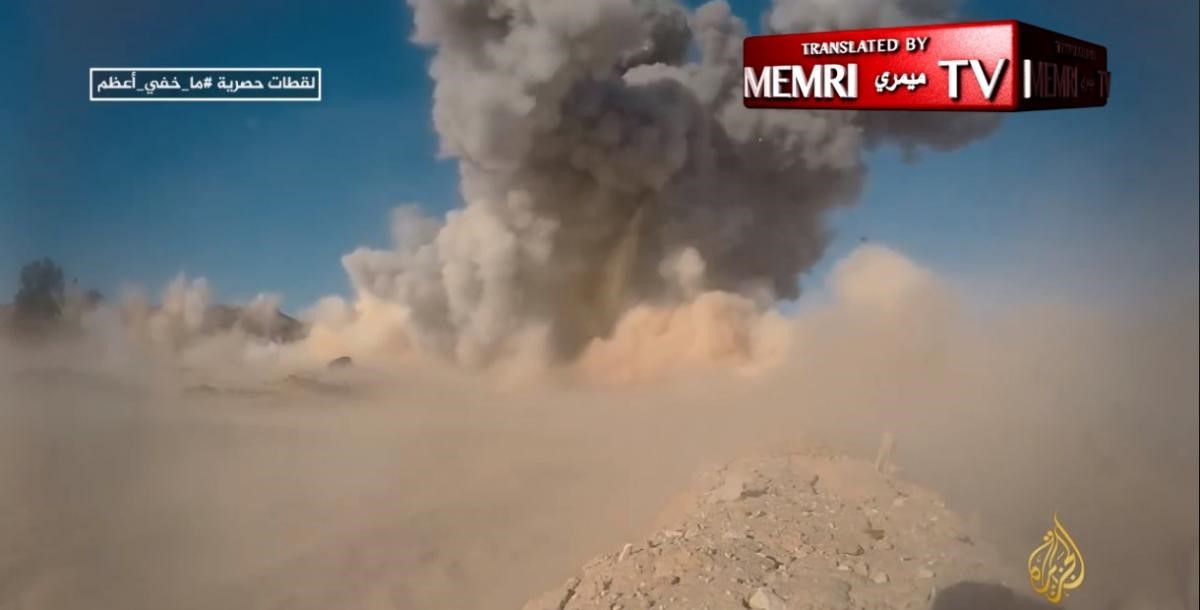 Abu Ibrahim: „As a result of the ceaseless search efforts at land and at sea, we have accumulated hundreds of munitions and warheads, and dozens of tons of explosives and propellants. We have enough pipes to produce thousands of rocket engines.”